It’s a touchscreen, not a BBQ!

Monitor temperature is a main issue in out of home advertising

Digital signage displays are the obvious evolution of the techniques put to use in every age to inform and promote their products to the general public. From the paper posters we moved to screens with nimations and even to video, considered even more effective to attract the attention of ever more bystanders, in relation to the continuous advertising bombardment to which they are subjected.

With the advent of the possibility of physical interaction between the out of home advertising and the customers, called to click, select, follow thematic paths to get more details about the products or place orders on a QSR totem, the conversions for sale have become more and more interesting but we had to collide with a new problem. The temperature monitor, especially in displays that require physical contact, can cause first or second degree burns to the fingers, if they are exposed to the sun without the shelter of a projecting roof. That’s because all the displays heat up while they are in use, and it’s clear how the situation gets worse if the out of home advertising is done under the sun, with temperatures destined to rise even more. This is a question not a little since, especially speaking of QSR, the will is to sell chips, certainly not to fry their fingers to their potential customers.

The problem with the out of home advertising under the sun

Do you remember the seven enemies of digital outdoors?

Yes, the sun is just the first on the list. The regulations in force require that the temperature of everything that can come into contact with the sun’s rays should be below 77 °F1 (25 °C) , but it is not easy. It has been shown that sunlight can increase the temperature by over 100 °F (38 °C), thus becoming a risk for every single user of digital signage display.

Moreover, some manufacturers have invented a system that pretend to reduce the thermal energy of the sun on the panel, like for example the UV-IR filters used as a Barrier, and pretending to save on the costs of the cooling circuit using high temperature TFT panel (with High TNI).

Too bad the only thing they get is an exaggerated increase in temperature of the glass and TFT, without a proper cooling system acting. This brings the monitor’s external temperature up to 212 °F (100 °C), turning customers’ fried fingers (referred to above) into boiled ones.

Not really a big improvement.

If there was a competition for those who produce digital signage displays with the lowest surface temperature, GDS would probably start off at a disadvantage. Because under normal conditions, testing the various monitors in the laboratory, it seems to have the front glass warmer than those of the competition. However, this is required and due to G+Bond®, the patented GDS system to dissipate some of the internal heat through the glass to improve the longevity of the optical LCD stack and internal components. GDS’ out of home answer offers a slightly warmer indoor solution than the main competitors, but the story changes when the monitors are installed outdoors. The real competition is on the field, under the sun, of course.

And it is right under the sun that the Midas monitor developed by GDS gives the best results, remaining always much lower than the critical burn temperature. In addition, with the Enerlight® technology, digital signage displays can absorb the solar load while protecting the internal components of the LCD display. This is a custom solution designed for all GDS monitors.

Out of home advertising: cook for your customers, don’t cook them

In conclusion, there are really many vestments to watch out for when planning a digital signage display strategy, as we saw in previous articles.

But one must not forget an important aspect like the temperature monitor.

All advertising, from television to out-of-home advertising, whether or not touch, aims to satisfy and respond to customer needs. You can miss a marketing campaign, but you can not absolutely allow yourself to cook customers, guilty of selecting the wrong cheeseburger in a QSR monitor.

Because we all know that a person who burns himself will be careful to touch a display again. 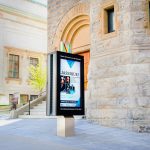 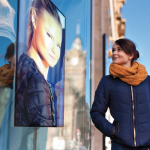 The Future of Retail is all about Flagship Stores and Brand ExperiencesEye-catching Solutions, Posts, Return of Investment